Showing posts from January, 2010
Show all

The little girl often felt somewhat left behind, having older brothers who moved fast and quick, always on the go. She often felt, at age 4 or 5, that she would never be able to keep up with her brothers. On a rainy day in the later part of a long ago October, she began worried that she would be left behind as everyone began to run home, through the rain, only about 8 or 9 blocks, but miles in the mind and small legs of a 5 year old little girl. Her older brother, the youngest of all her brothers, seemed to understand her fears and looking over to her, told her, “Take my hand and you’ll be able to run as fast as me”. Trusting her older brother, she reached out, grasped the secure hand of her brother, and much to her amazement, was able to run faster than she ever had before, feeling not small as the little girl she was. The boy, the brother, young himself, never told his little sister that that time, and times that followed, that he really just slowed down to encourage his little sis
Post a Comment
Read more

New Yet Not So Much

Not everything we walk into that is called or classified as new is really new. The feelings, perceptions, and experiences may be new, or may feel new, but the thing we walk into is not necessarily new. We enter a New Year every year, and at the same time, the earth remains pretty much the same, as well as the planets, stars, wind, seasons, etc. The newness often is more in the different way we see life, ourselves, and our situations in life. The newness can also be what we dream for and desire, the changes we wish in our lives, and the wants we wish to see in not only our lives but in the lives of those we love and encounter. As we pass the first 10 days into a New Year, many of us have probably began to see the sameness on the horizon, or even worse, have begun to let go of the changes we hoped to see in our lives for this year. I have to wonder if most of the changes we desire in a new year are more externally focused than internally focused. Taking time to find meaning in self, in
Post a Comment
Read more 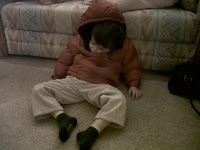 Exhaustion set in, the body and mind shuts down, and a great sigh was heard throughout the country, as all the packages were opened, the trash picked up, the parties completed, family came and left, and the New Year has moved into the present year. In exhaustion, finally finding the time to rest and recuperate, life slowly begins its transition back to normalcy, schedules, routine duties, car pools, work, and the life. It is over, for yet another year. And then there are those who are already beginning the plans and expectations for the next upcoming Christmas season. My son announced today number of days until Christmas as my daughter told me maybe Christmas will come faster this year. The eyes of children, the joy they see in what our eyes have grown dim to, is wonder and joy we should all do our best to emulate. Their world can be so much more than the reality of ours. Why we choose to allow our minds to grow old is beyond me. So, we will tell the stories of our Holidays for th
Post a Comment
Read more
More posts

Rodney
I am a "normal" guy walking the world discoving the realities, Joys, and adventures of living life and no longer just surviving.